Find traditional instrumental music
This is the stable version, checked on 16 September 2022.
Jump to: navigation, search

Back to Maid of Glenconnel (The) 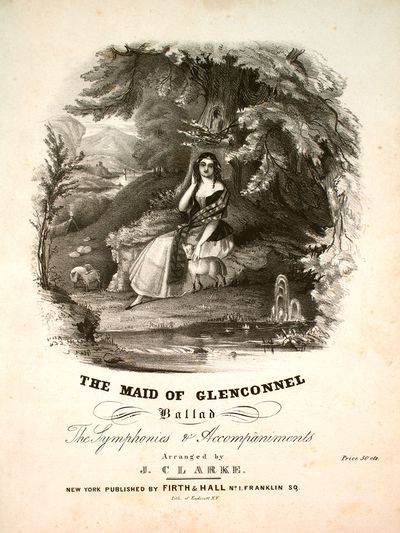 A sheet music cover for Maid of Glenconnel

The composition is credited to the Major Montgomery, the Earl of Eglintoun, by Nathaniel Gow (Complete Repository, Part Fourth, 1817, p. 10), set as a jig entitled "Island of Mull (The)", although a note in Woods Songs of Scotland (p. 208) gives that Blackie's Book of Scottish Song gives the author as "Munro". The melody was adapted as the air of a song, "Maid of Glenconnel", that tells of the betrayal of a lass ("The pearl of the fountain, the rose of the valley") by a faithless lover, and warns others to beware. Woods prints the song under the title "Pearl of the Fountain." The lyric begins:

The pearl of the fountain, the rose of the valley,
Are sparkling and lovely, are stainless and mild;
The pearl sheds its ray 'neath the dark waters gaily,
The rose opes its blossom to bloom on the wild.
The pearl and the rose are the emblems of Mary,
The Miad of Glenconnel, once lovely and gay;
A false lover woo'd her ye damsels be wary,
Now seath'd is the blossom, now dimm'd is the gay.

The air was adapted for several musical purposes. As a dance it appears as the first figure of "The Mid Lothians" a set of traditional Scottish tunes selected by J. S. Pollock (advertised as a "Professor of Dancing, late of Paris"), with the tunes arranged by R. W. Evans and new quadrille figures (given in French and English) choreographed by Pollock. The quadrille was published in London in the early 1820's. It is in Scottish Country Dance band repertoire, and has been recorded by Cape Breton fiddlers.

According to David Murray (Music of the Scottish Regiments, Edinburgh, 1994, pp. 208-209), the melody was employed by the 54th Regiment of the British army as their 'march past'. The 54th had been raised in 1755 by John Campbell of Mamore, later 4th Duke of Argyll, who made his reputation with the Argyll Militia fighting against the Jacobites in the rising of 1745. He was affectionately known as "Colonel John" to the troops, and the affection was passed along to his wife. Her favourite song was "The Maid of Glenconnel," a melody which was often played by the 54th band, so much so that the tune became associated with the regiment and was adopted as their distinguishing march. Although the 54th has long been amalgamated into other units (with the 39th in 1881 as the Dorset Regiment, and again in 1958 with the Devonshire Regiment), "Maid of Glenconnel" survives as the regimental march past (paired with "Widdecombe Fair" in modern times as the march of the Devon and Dorset Regiment).

Back to Maid of Glenconnel (The)