MAIGHDEAN MHUILE (The Maiden of Mull). Scottish, Air (6/8 time). B Flat Major. Standard tuning (fiddle). AB. The Island of Mull lies off the western coast of Scotland. The song likely is about a girl from the island.

Somewhat tangentially, however, is the folk custom in some parts of Scotland that the last handful of grain that is cut by reapers on any particular farm is called the Maiden (as it was on Mull) or the Old Wife (Islay, Kintyre). Sir James George Frazer (The Golden Bough: A Study in Magic and Religion, vol. 7, 1912, p. 155) writes: 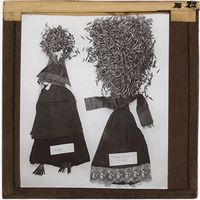 A ‘Cailleach’ (divine hag or old wife) from Islay, and a ‘Maighdean Bhuana’ (harvest maiden) from Argyleshire, c. 1894

Superstitions attach to the winning of the Maiden. If it is got by a young person, they think it an omen that he or she will be married before another harvest. For that and other reasons there is a strife between the reapers as to who shall get the Maiden, and they resort to various stratagems for the purpose of securing it. One of them, for example, will often leave a handful of corn uncut and cover it up with earth to hide it from the other reapers, till the rest of the corn on the field is cut down. Several may try to play the same trick, and the one who is coolest and holds out longest obtains the coveted distinction. When it has bee cut, the Maiden is dressed with ribbons into a sort of doll and affixed to a wall of the farmhouse."