Find traditional instrumental music
This is the stable version, checked on 3 December 2020.
Jump to: navigation, search

Back to Major L. Stewart's Reel--of the Island of Java

MAJOR L. STEWART'S REEL--OF THE ISLAND OF JAVA. AKA - "Major Stewart." Scottish, Reel. G Major. Standard tuning (fiddle). AB (Marshall): AABB' (Kerr). Composed by William Marshall (1748-1833) in honor of Major Ludovick Stewart (1782-1848), of the 24th Regiment of Foot. Major Stewart served in Java and in Bombay, India, where he met and married Margaret Fraser of Newton near Ceauly, Inverness. Marshall knew them through his friendship with the Stewart family, who had lived at the farm of Keithmore prior to Marshall and his family after Marshall left the position of Steward of the Household for the Duke of Gordon. The two families remained friends when the Stewarts moved on to Pittyvaich, Duftown, Banff (Cowie, The Life and Times of William Marshall, 1999). See also the companion tune "Mrs. Major L. Stewart of the Island of Java." The Stewart union produced eleven children, nearly all of whom seem to have survived into adulthood.

There are some similarities in the first strain to the 6/8 time "Drover Lads (The)." 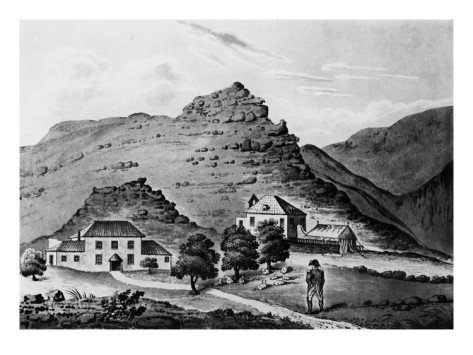 Stewart also dabbled as an amateur artist, and one of his pictures survives, depicting a solitary Napoleon facing the house of the Balcombe family, where he lived on the Atlantic island of St. Helena from October 19th to December 10th, 1815.

Back to Major L. Stewart's Reel--of the Island of Java