MAK A KISHIE NEEDLE, DYE/DIE. Shetland, Shetland Reel. G Major. Standard tuning (fiddle). AABB. "Dye was an affectionate term for Grandfather on the West side of Shetland. A Kishie is a form of straw basket which was woven using a wooden needle very similar to a fishing-net needle. So, the title can be interpreted as -- 'Make a Kishie Needle, Grandad'" (Anderson). The tune is in the repertory of the Shetland Fiddle Band and is widely known in the Shetlands.

Two kishie needles, one dated 1885, from the Shetland Museum [1] 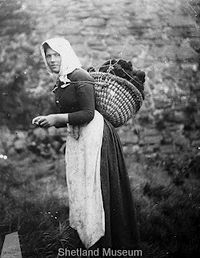 A woman with a kishie basket.

The authors of Old-lore Miscellaney of Orkney, Shetland, Caithness and Sutherland (Vol. VI, Part 1, Jan., 1913, p. 7) explain that "Mak a Keshie Needle, Dey" was a reel used in the Walls District of Shetland:

Why this name is applied to a piece of Dance Music, I have no means of knowing. Such names may be used metaphorically, or there may be some hidden meaning only known locally. "Dey" is a pet name for grandfather, and a "Keshie Needle" was a piece of hard wood or bone, made like a needle and extensively used in the olden days for sewing the numerous articles made of straw. When a Keshie (a straw basked for carrying on the back) was made, it was strengthened round the brim by a thick band of straw called da "faus gird," and it was her that the use of the "Keshie Needle" came in.

Source for notated version: "the late" Peter Fraser (Shetlands) [Anderson]. Fraser was one of the founding members, with Anderson, of the Shetland Folk Society.


See also listing at:
Hear Tom Anderson play the tune at Tobar an Dualchais [2] (the last tune in a set of 3 reels that includes "Peerie Hoose under da Hill (Da)" and "Kiss Her Sweetly (1)).