Find traditional instrumental music
This is the stable version, checked on 9 January 2022.
Jump to: navigation, search

Back to Manitoba's Golden Boy

MANITOBA'S GOLDEN BOY. Canadian, Two-Step. D Major. Standard tuning (fiddle). AABB. Composed by Manitoba Metis fiddler Woodridge, Manitoba, fiddler Andy de Jarlis (1914-1975) (nee DesJarlais), who first recorded it as the instrumental "Golden Boy Two-Step" and later wrote and recorded lyrics for it. The tune takes its name from The Golden Boy, a 5.25 meter tall statue, made in France, that has graced the dome of the Manitoba Legislature Building since its completion in 1920.

The statue (depicting Mercury holding a sheaf of wheat) was sculpted by Charles Gardet in Paris in 1918, and cast in the Barbidienne foundry near Paris. The factory was shelled early in the First World War, but the statue survived intact albeit buried by rubble. It was placed in the hold of a ship for transport to Canada, however, the vessel was commandeered for service as a troop ship for two years in World War 1, and "The Golden Boy" remained in the hold as ballast the entire time as it transversed the Atlantic. Golden Boy was finally unloaded in Halifax late in 1919, and shipped by train to Manitoba, to become one of the city's treasured symbols. 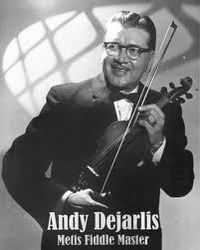 With his head way up high in the Manitoba sky,
He shines in the sun, till your work is done,
And he glows in the night as he proudly holds the light
That brightens our happy way of life.
He's the symbol of success, at the gateway to the west,
And he's our legendary pride and joy.
He's an idol by acclaim. May the Good Lord bless his name.
He's the famous Manitoba Golden Boy.

Back to Manitoba's Golden Boy