Find traditional instrumental music
This is the stable version, checked on 21 December 2022.
Jump to: navigation, search

Back to Mantua Makers Frolic (The)

MANTUA MAKER'S FROLIC, THE. AKA - "The Mantua Makers." English, Country Dance Tune (2/4 time). B Flat Major. Standard tuning (fiddle). AABBCC. Mantuas [1] were a woman's loose gown, called a 'mantie' or mantua in the 17th and 18th centuries from the French word manteau. Alternately, it referred to a mantle fashionable in the second and third decade of the 19th century, also for women, derived from the custom of wearing a "plaid." However, since they were of open crochet or lace work, they didn't hide the face and thus were more stylish for dance assemblies. A dictionary also equates the term 'mantua-makers' with dressmakers, and says a mantua is a "woman's loose outer skirt." Mantuas were manufactured as an Edinburgh women's cottage industry in small workshops or at home. 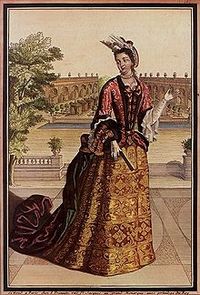 Back to Mantua Makers Frolic (The)