Back to Manx Sword Dance[edit]

MANX SWORD DANCE. AKA and see "White Boys Dance (The)." English, Air and Jig. D Major. Standard tuning (fiddle). ABCC. A traditional tune and dance from the Isle of Man, a hybrid of Morris, Sword and Manx dance styles. There is an oft-repeated assertion that the song "Reeaghyn dy Vannin" (the Manx sword dance), is very similar to a lullaby from the Hebrides and is also said to have been a ritual dance during the Scandinavian era. The is, however, no evidence to substantiate this claim. The dance and tune are associated with The White Boys, by which name the local Mummers went by on account of the white overalls and rag coats they wore. They were, according to Mona Douglas (1898-1927) in her 1928 article "Ceremonial Folk-Song, Mumming, and Dance in the Isle of Man": 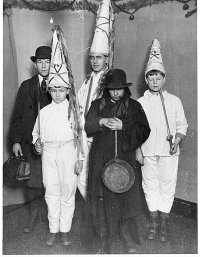 ...a familiar feature of Manx Christmas festivities up to a very few years ago. Their play was a variant of the usual theme, 'St. George and the Turkish Knight.' There is, however, a comic character not usually found, so far as I am aware, in the English versions of the play 'Devil Doubt'. I have been told that this play formerly ended with a dance, but have not been able to get a clear description of the latter. It appears to have been a kind of circular reel, however.

There is a notation of the dance in Ivor Allsop's book Longsword Dances. Standing out from the group was the character of the Doctor, who wore black. The dance itself was performed by six dancers, with the Doctor from the play moving in and out of the set. At the end of the dance (as in Rapper dances) a lock was formed of the swords, which was then used to seat the Doctor, who was elevated to shoulder-level (similar to some Continental sword dances).

Back to Manx Sword Dance[edit]