Back to March Past[edit]

MARCH PAST. AKA and see "Din Tarrant's (6)," "Wha Saw the Forty Twa," "Wha Saw the Forty Second?," "Wha Wadna Fecht for Charlie?," Scottish, March. John Kirkpatrick identifies the tune as Scottish, used there as a march or strathspey. The melody is also played in Ireland as a polka. It was picked up by morris dancers in the Cotswold village of Eynsham, Oxon, for the dance The Eynsham Morris, for which "March Past" or Nutting We Will Go" was played. The village team impressed collector Cecil Sharp in 1910 with their speed and high kicks, but by 1914 the side had died out, to be revived briefly in 1924–27 and 1937–38. 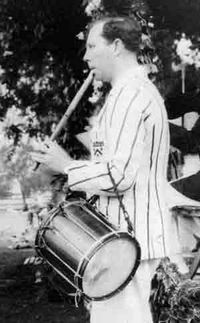 Source for notated version: a manuscript by Kenworthy Schofield [Bacon], who mastered both the accordion and the pipe and tabor, and who was a dance leader and teacher. He was a member of the Cambridge Morris Men in the 1920's.

Back to March Past[edit]