Find traditional instrumental music
This is the stable version, checked on 9 March 2022.
Jump to: navigation, search

Back to March in Bluebeard 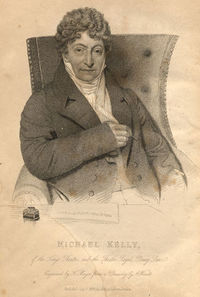 MARCH IN BLUEBEARD. AKA - "Blue Beard's March." AKA and see "Blue Beard." English, March. D Major. Standard tuning (fiddle). AABA: AABB (Cahusac). A popular march from the period opera Bluebeard, based on the fairy tale of a famous nobleman and his over-curious wife. The original story was written by Charles Perrault and first published in 1698; it was turned into an opera by Grétry called Barbe Bleue. Michael Kelly saw a production in Paris in 1790 and paid Colman to make a libretto out of it in which the villain became Turkish rather than French. When Blue Beard, or Female Curiosity was staged in 1801 at the Theatre Royal, Drury Lane, reviews were mixed but it proved popular with audiences. It employed an impressive grand cavalcade across mountains, which used model figures and animals growing larger at each successive appearance. Boys were also hired for the cast to preserve the perspective. It was revived at Covent Garden in 1811, when 16 white performing horses were used, "to thunders of applause." Kelly himself acted in the play and told this amusing story: 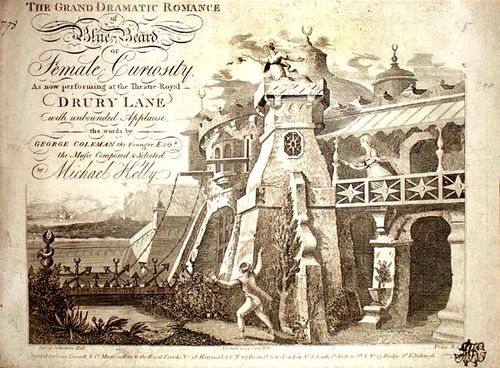 At the end of the piece, when Blue Beard is slain by Selim, a most ludicrous scene took place. Where Blue Beard sinks under the stage, a skeleton rises, which when seen by the audience was to sink down again; but not one inch would the said skeleton move. I, who had just been killing Blue Beard, totally forgetting where I was, ran up with my drawn sabre, and pummeled the poor skeleton's head with all my might, vociferating, until he disappeared, loud enough to be heard by the whole house, "(Damn) you, why don't you do down?" The audience were in roars of laughter at this ridiculous scene, but good-naturedly appeared to enter into the feelings of an infuriated composer. (quoted in the New York Times, Sept., 23, 1877)

"March from Blue Beard" was immensely popular from the beginning of the 19th century, for it appears in a number of musicians' copybooks and manuscripts, including those of James Haslingden (from the south or Midlands of England), dated 1827, and an anonymous Staffordshire musician's manuscript, dated 1820. In America, it appears in the music manuscript copybooks of Morris Woodruff (1803, Litchfield, Conn., as "The Blue Bards March, or Female Curiosity"), John Beach (1801–1825, Gloucester, Mass.), Daniel Henry Huntington (Onondaga, N.Y., 1817), George White (Cherry Valley, N.Y., c. 1790–1830), Joel Allen (1800–1817, Southington, Ct.), and the Bellamy Band (Hamden, Ct., 1799–1804). In print it can be found in Edward Riley's Flute Melodies (New York, 1814–1816), P.H. Munson's Figures of the Newest and Most Fashionable Country Dances (Hudson, N.Y., 1808) and in the various editions of Alvan Robinson's Massachusetts Collection of Martial Musick (1818–1826), to name just a few. One of the oddest instances of the tune is on the barrel organ from the polar expedition of Admiral Parry of 1819. In place of a ship's fiddler (common in those days), Parry introduced a mechanical barrel organ on board ship to provide entertainment and a vehicle by which the men could exercise (i.e. by dancing). "March in Bluebeard" was one of eight tunes on barrel no. 4. This tune may be the "Slow March in Bluebeard" that was included in the music manuscript copybook of Henry Livingston, Jr. Livingston purchased the estate of Locust Grove, Poughkeepsie, New York, in 1771 at the age of 23. In 1775 he was a Major in the 3rd New York Regiment, which participated in Montgomery's invasion of Canada in a failed attempt to wrest Montreal from British control. An important land-owner in the Hudson Valley, and a member of the powerful Livingston family, Henry was also a surveyor and real estate speculator, an illustrator and map-maker, and a Justice of the Peace for Dutchess County. He was also a poet and musician, and presumably a dancer, as he was elected a Manager for the New York Assembly's dancing season of 1774–1775, along with his 3rd cousin, John Jay, later U.S. Chief Justice of Governor of New York. The tune was set in the key of 'C' in Lincolnshire musician Gibbons' original manuscript.

Back to March in Bluebeard