March of the Forty-Fourth Regiment

Back to March of the Forty-Fourth Regiment[edit]

MARCH OF THE 44th REGT. English, March (cut time). D Major. Standard tuning (fiddle). AABB. The British 44th Regiment of Foot (later the Essex Regiment and now the Royal Anglian Regiment), was originally known as Lee's Regiment (after their Colonel) and was one of the unluckiest units of the arimy. The 44th was attached to Sir John Cope’s at the Battle of Prestonpans (1745) and was annihilated by the Highlanders of Prince Charles Edward Stuart. Nearly all the regiment's infantrymen were killed, wounded or captured. Ten years later, in July, 1755, under the command of Colonel Sir John Halkett (who happened to have been the lieutenant colonel in command of the regiment at Prestonpans, and who had been taken prisoner), the 44th was part of General Edward Braddock's army of regulars and colonial militia that cut their way through the Pennsylvania wilderness to take Fort Duquesne at the forks of the Ohio River. The army was attacked in the forest by a force of French regulars, Canadian militiamen and Indian allies and was massacred. Halkett and his son, and many of the 44th's officers and soldiers, died in the ensuing rout, along with General Braddock. Finally, in Afghanistan in January, 1842, the 44th was part of the disastrous retreat from Kabul of General Sale's army in the First Afghan War. The army trudged laboriously through the winter snows of the Hindu Kush, attacked repeatedly by the Afghan forces of Akbar Khan. At Gandamak in the Afghan mountains the 44th Regiment made a final stand and was annihilated. 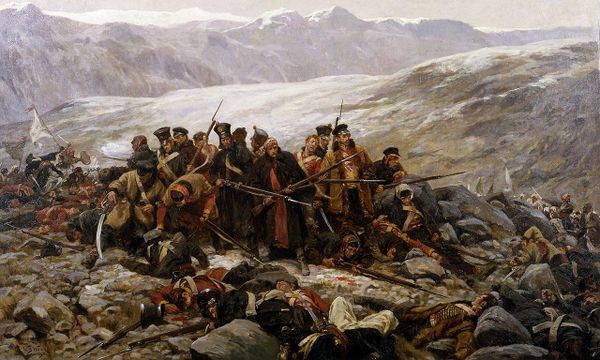 Back to March of the Forty-Fourth Regiment[edit]