Find traditional instrumental music
This is the stable version, checked on 12 September 2019.
Jump to: navigation, search

Back to Marche du boulanger

MARCHE DU BOULANGER (Baker's March). French-Canadian, March (whole time). G Major ('A' and 'B' parts) & D Major ('C' part). Standard tuning (fiddle). ABBCC'. "Marche du boulanger" was recorded by fiddler Arthur-Joseph (A.J.) Boulay (1883-1948) and harmonica player Henri Lacroix (1895-1962), both prolific recording artists in Montreal in the late 1920's and 1930's. The march was recorded in September, 1930, but not issued by Victor until 1931. Lacroix continued to develop the piece, recording it again in Montreal in March, 1931, for Brunswick Records with the group Les Gais Villageois, "under the direction of Henri La Croix," a band of five or six individuals playing (variously) piano, guitar, violin, accordion, drum, jew's harp, tambor, castanets and other sound effects [Brunswick Br 52091]. The march was originally composed by Louis César Désormes (1840-1898), orchestral director at the Folies-Bergère, as "La marche du boulanger" and became the vehicle for an early 20th century song, "En revenant de la revue" (Coming back from the show), by Paulus, popular in France. 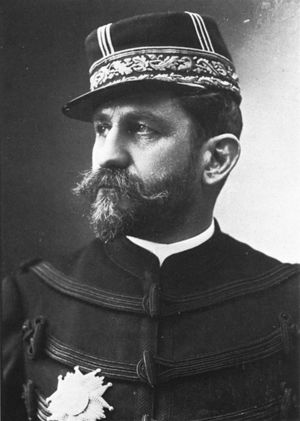 Georges Boulanger. Photo by Nadar.
Désormes march honors not the guild of bakers, but rather Georges Ernest Jean-Marie Boulanger (1837–1891), nicknamed Général Revanche, a French general and politician. Boulanger led an ultra-nationalistic movement in France in the 1880's with the aim of recapturing the territories of Alsace and Lorraine for France. His superiors in the army noted that he had a penchant for "clumsy intrigue"; he was not particularly bright or well-organized, but he fit the popular picture of a leader for the time and garnered much popular support during the Third Republic. After 1889 his influenced waned quickly, helped by his self-imposed exile and the opposition of the established government. He returned to Brussels in 1891 where he committed suicide at the grave of his mistress, Madame de Bonnemains, who had died in his arms the preceding July. They were buried in the same grave.

Back to Marche du boulanger