MARCHING JAYBIRD. AKA - "Walking Jaybird." AKA and see "Jaybird March." G Major. Standard tuning (fiddle). AABB. The tune was in the repertoire of North Carolina African-American banjo and guitar players Etta Baker and her sister-in-law, Lacey Phillips, played fingerstyle and popularized through Phillip's 1956 recording. It is known as a banjo piece today, although it did was not always so. Etta Baker learned the tune from her brother-in-law, who himself had obtained it from his father. It was played in Baker's North Carolina community, where it functioned as "an old dance, sixteen hands-up, circle to the right. That was a very special piece played with violins." Stephen Wade records in his book The Beautiful Music All Around Us: Field Recordings and the American Experience (2012) that "Marching Jaybird" is a 'mirror' of "Spanish Fandango." 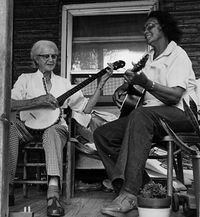 Perhaps like the social dances in the American southwest also called fandangos, Etta Baker described hearing it at "a happy gathering that the older people had, like corn shuckings and a big dinner at night...and this tune would be played at an old mountain entertainment." When I asked her if she thought it similar to "Spanish Fandango," which she played on the guitar, she paused. "I would think so, yes. I hadn't really thought of that...The chords in there are so much alike, it keeps you kindly on the go to keep them separated. ... [p. 215]