Moyra Cowie, in her book The Life and Times of William Marshall (1999) says that the Church of Marnock was built on a rise on top of a site once used by the ancient Picts, near to the village or Aberchirder. The view from the church looks over to the Deveron River valley. The Parish of Marnoch is named after St Marnan, a Celtic missionary from Ireland who settled on the banks of the River Deveron near what is now Bridge of Marnoch. Since the time of St Marnan there was always a church in the churchyard beside the river and over the centuries it served in turn, Roman Catholics, Episcopalians and Presbyterians. By the 1790s the church had become totally ruinous and in 1792 the Presbytery decided to build a new church close by on Cairnhill to escape from the smells of the kirkyard! However, the gable end of the old church can still be seen in the kirkyard. The Rev David Henry, writing his account of the Parish of Marnoch in June 1842 for the NSA (see box below) states that in 1831, local people raised funds to build a vault in the former church in which the bodies of the dead were laid for two months before being buried, after a grave was robbed, causing a great sensation in the parish [1]. 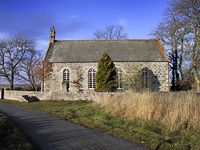 The minister of the church in Marshall's time was the Reverend William Stronach (1754-1837), who married the youngest daughter, Harriet, of Sir John Reid of Barra Castle; the Reverend helped Marshall with the distribution of his music [Cowie]. Rev. Henry, referred to above, had been Stronach's assistant and was his successor.