MARQUESS OF TWEEDDALE'S (STRATHSPEY). Scottish, Strathspey. A Flat Major. Standard tuning (fiddle). AAB. The tune appears in the 2nd Collection of Malcolm MacDonald of Dunkeld, dedicated to the Earl of Breadalbane. The Marquess of Tweeddale at the time MacDonald issued his collection was George Hay (c. 1752-1804), 7th Marquess of Tweeddale, a Scottish Peer. In 1785 he had married Lady Hannah Maitland (a daughter of the 7th Earl of Lauderdale). In 1802 the Marquess's health began to decline and the couple traveled to the Continent in search of more healthful climes. In France in 1803 the couple was detained by police when war broke out between the countries, and Hay and his wife were imprisoned in the fortress of Verdun. The Marchionees died in 1804, followed by the Marquess a few months later. Tweeddale is a region in the Scottish Borders. 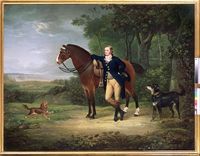 "A Portrait of a Gentleman" by Alexander Nasmythl, thought to be George Hay, 7th Marquess, c. 1790