Find traditional instrumental music
This is the stable version, checked on 12 December 2020.
Jump to: navigation, search

Back to Marquis of Lorne (1)

MARQUIS OF LORNE [1], THE. Scottish, English; Hornpipe. G Major. Standard tuning (fiddle). AABB (Laybourn, Kennedy, Miller & Perron, Raven): AB (Honeyman, Martin). The Marquis of Lorne is name of the heir to the Dukedom of Argyll. The title of this particular piece may refer to the Marquis of Lorne, son of the Duke or Argyll, who married the Princess Louise in 1871. Louise was the 4th daughter of Queen Victoria, the reigning English monarch, and the wedding caused a stir as it was unheard of for the daughter of a sovereign to marry a subject of the realm. Lorne was sworn in as the first Governor-General of Canada in 1878. See also the similar Canadian "Middle Island Hornpipe" and the Irish variants "Dunn's Hornpipe," "Flowers of Antrim (1) (The)," "McDermott's Hornpipe (1)," and "Sligo Fancy (The)." 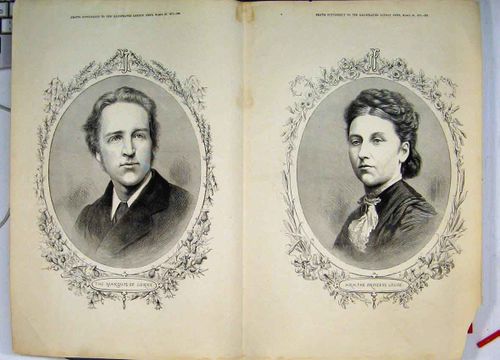 Marquis of Lorne and Princess Louise

Back to Marquis of Lorne (1)