Marquis of Tweeddale's Reel (The)

Back to Marquis of Tweeddale's Reel (The) 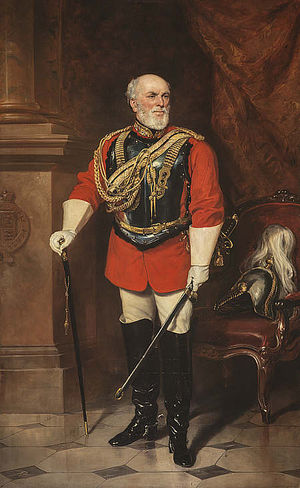 George Hay, 8th Marquess of Tweeddale
MARQUIS OF TWEEDDALE'S REEL, THE. Scottish, Reel. E Flat Major. Standard tuning (fiddle). AAB. Composed by William Marshall (1748-1833). According to the contemporary writings of Elizabeth Grant of Rothiemurchus, quoted by Moyra Cowie (The Life and Times of William Marshall, 1999), the Marquis was "to my mind, for thick set and square built and coarse mannered with that flat Maitland face. He was altogether the ugliest boxer or bruiser, looking sort of common order, yet he had a kind manner and pleasant smile and made a tender husband to Lady Susan Montague." Lady Susan was the grand-daughter of Alexander, the 4th Duke of Gordon, for whom Marshall worked as Steward of the Household.

The eighth Marquis of Tweeddale, George Hay [1], was born in 1787 and as a youth impressed others with his physical strength and prowess, remarked upon for the rest of his life. He entered the army in 1804, the year his father died (see notes for "Earl of Tweeddale's Favorite (The)" and Marquess of Tweeddale's Strathspey), and the year he succeeded to the family titles and estates, when he was only seventeen years of age. His career flourished under the tutelage of exceptional commanders such as Sir John Moore, and, in the Peninsular War, with the Duke of Wellington, who mentioned Hay in dispatches for his personal bravery. After being wounded he returned home for a time, but was back in action in 1814, this time rejoining his regiment in Canada in time to assist in turning back an American invasion of Canada at Niagara Falls, where he was again wounded. Promotions followed, and Hay attained the rank of general in 1854, was nominated colonel of the 2nd Life Guards in 1863, and ten years after was created a field marshal. In 1816 he married Lady Susan Montagu, third daughter of the fifth Duke of Manchester, and in 1824, like his father, was appointed Lord Lieutenant of Haddingtonshire. By 1842 Hay was again in overseas service, this time in India where he was appointed Governor of Madras and Commander-in-Chief of the Forces. Returning home in 1848, Hay devoted himself to improving his estates and was ingenious in experimenting and inventing tools and applications in that arena, impressing his fellow rural gentry enough be be elected President of the Agricultural and Highland Society. He died at age ninety, attempting to recover from an accident in which he was burned. James Taylor, in his The Great Historic Families of Scotland (1887), remarks: 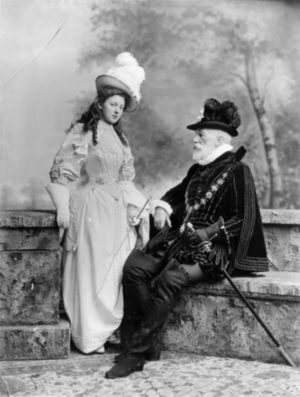 A photograph of George Hay, in costume

Lord Tweeddale was conspicuous for his stature and strength; and numerous anecdotes have been told of his gallantry in the field, and of the terrible effect with which he wielded a sabre longer by a good many inches than the regulation weapon. He was a famous boxer--one of the very best--and when provoked gave practical proof of his prowess. He was an excellent horseman, was long known as 'the Prince of the Heavy Bays,' was a most skilful whip, and once drove the mail-coach from London to Haddington at a sitting.

Back to Marquis of Tweeddale's Reel (The)