MARR LODGE. Scottish, Reel (cut time). A Major. Standard tuning (fiddle). AAB. Composed by Aberdeenshire fiddler-composer Alexander Walker (b. 1819). Mar Lodge is an estate in Aberdeenshire, near Braemar in the Cairngorms, and contains four of the five highest mountains in the United Kingdom. It includes the upper watershed of the River Dee and remnant Caledonian pine forest, and is now entirely within the boundaries of Cairngorms National Park. 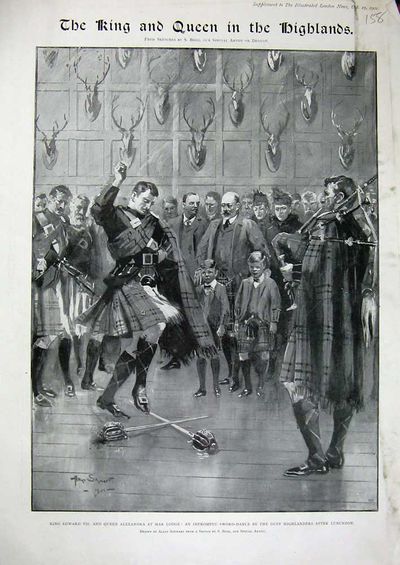 "King Edward VII, and Queen Alexandra at Mar Lodge: An Impromptu Sword-Dance by the Duff Highlanders after Luncheon (1901)

Mar Lodge [1] itself was a sporting lodge first constructed in the 18th century by Lord Braco; however, the lodge has been rebuilt on the same site several time since then, after each of the previous structures were destroyed by fire. The estate is associated in the 19th century with Alexander William George Duff, 1st Duke of Fife (1849–1912), styled Viscount Macduff between 1857 and 1879 and known as The Earl Fife between 1879 and 1889. He was a British peer who married Princess Louise, the third child and eldest daughter of King Edward VII and Queen Alexandra. When Alexander died in 1912 after being shipwrecked on the Moroccan coast his body was eventually interred in the chapel at Mar Lodge. See also Walker's "Lord MacDuff."