Back to Marriage and Money[edit]

MARRIAGE AND MONEY. AKA and see "Dunnigall's Rant," "Dandling of the Bairns (The)." Scottish, Jig (3/8 time). D Major. Scordatura/ADae tuning (fiddle). ABBCCDD. In addition to the 1740 McFarlane Manuscript, the jig appears in the 1710 Sinkler Manuscript (as "Dunnigall's Rant") and Riddell's 1794 Scotch, Galwegian and Border Tunes (as "The Dandling o' the Bairns"). Johnson (1984) states the tune was improvised on endlessly as the tune has no stopping places, and "every cadence is gently undermined as it approaches, and the next section follows without the melody being broken at any point." The alternate title "Dandling of the Bairns" suggests to him that it could have been a tune played repetitiously to put children to sleep, although in many places dandling a baby would appear to be gentle physical jostling or stimulation to keep a child amused-the opposite effect. Nevertheless, it is a difficult piece to bring off in performance, Johnson notes, and that probably only accomplished players attempted it. The tune was collected in Edinburgh in 1740, Glasgow in 1710, and Newton Stewart around 1705. 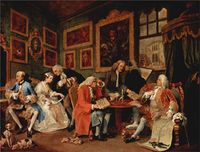 Back to Marriage and Money[edit]