MARSHALL SAXE'S TAMBORINE. AKA - "Marshall Saxe's Tambourine." English, Country Dance Tune (2/4 time). A Major. Standard tuning (fiddle). AABB. The melody appears to be unique to London publishers Charles and Samuel Thompson's 1757 country dance collection. Maurice, Compte de Saxe [1] (1696-1750), was one of the most brilliant commanders in the history of the French army. Born the natural son of the King of Poland, Augustus II and countess Aurora Königsmarck, he was the first of 354 illegitimate children. Indeed, he, too, was notorious for his own amorous exploits and for his tragic liaison with the famous French actress Adrienne Lecouvreur (who mysteriously died, some say at the hands of her rival, the duchesse de Bouillon). Saxe served in the armies of several countries on the Continent, and became Marshal of France in 1743. His reputation was ensured by his important victories at Fontenoy (1745) and Raucoux (1746), and by the capture of Maastrcht (1748). Louis XV gave him life tenure of the castle of Chambord. The writer George Sand was one of his descendents. 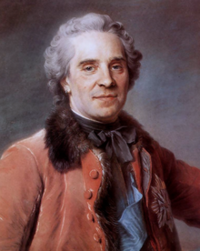