Back to Martin Mulhaire's No. 9[edit]

MARTIN MULHARE'S NO. 9 (Ríl Mháirtín Ui Mhaolchéire, Uimhir a Naoi). AKA - "Mulhaire's." AKA and see "Ciaran O' Reilly," "Noreen's," "Ríl Chiarain Uí Rathallaigh," "Roly Poly." Irish, Reel. G Major (Mulvihill, Peoples): D Major (Breathnach, Bulmer & Sharpley, Miller). Standard tuning (fiddle). AABB (Miller, Mulvhill), AA'BB' (Breathnach, O'Malley, Peoples). Composed by Bronx B/C accordion player Martin Mulhaire in the 1950's as "Martin Mulhaire's No. 9.". Mulhaire was originally from Dún an Uchta, east County Galway, and played with the famed Tulla Céilí Band before moving to the United States. It has been set for the pipes by Pipe Major Peter Hewletts in his Music for the Great Pipe. Versions are popular both in the key of 'D' and 'G'. 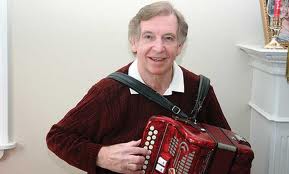 "Noreen's" is the title for the tune used by The Kilfenora Céili Band on a 1997 recording.

Back to Martin Mulhaire's No. 9[edit]