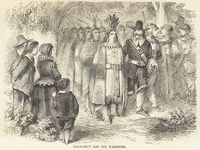 The previous winter had been a hard one-nearly half of the original 102 Pilgrims perished-and Massasoit and his tribesmen had helped the survivors by teaching them how to plant the native corn, using fish fertilizer. That autumn the harvest had been plenty, and the game abundant, and in thanks Governor Bradford invited Massasoit and ninety of his warriors to the feast; thus, as Stuart Berg Flexner points out (in Listening to America, 1982) the Native Americans outnumbered the Pilgrims at the meal.