Back to Mayor Harrison's Fedora[edit]

MAYOR HARRISON'S FEDORA (Feadoir an Meara Harrison). AKA - "The Fedora." Irish, Reel. E Dorian. Standard tuning (fiddle). ABC (O'Neill): AA'BB' (Breathnach). Carter Harrison Jr. [1] (1825-1893) was the mayor of Chicago in the early years of the 20th century, and first appointed Francis O'Neill Captain of the police force. His trademark was a brown fedora hat, and this reel was named in his honor in O'Neill's Dance Music of Ireland (1907), despite Harrison's opinion of O'Neill as a "conscientious, industrious, if not brilliant chief" (Carolan, 1997). Supposedly, O'Neill's daughter said that Harrison was a "frequent guest at the O'Neill's for Sunday dinner." Harrison was assassinated in his home by a disgruntled office-seeker just as he began a fifth term in office; his election and death coincided with the grand World's Columbian Exhibition in Chicago, whose closing ceremonies were cancelled in lieu of the huge public funeral held for the mayor in Chicago. 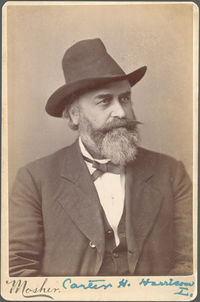 The 3rd part of "Mayor Harrison" is the same as the 2nd of "Sporting Molly." The tune is heard in both two and three part versions, sometimes with the third part being played only once at the end. Peader O'Loughlin's version was a two-part one transcribed by Breathnach for CRÉ II, and the fiddler remarked the tune was played in another key by other fiddlers. Paul de Grae takes this to be a reference to his friend Paddy Canny, "who plays it in G major/minor-that lovely east Clare/Galway scale with mutable 3rd and 7th notes. On his 1997 CD Paddy Canny does play the third part, or rather his own inimitable reworking of the standard third part - a marvellous performance" [IRtrad]. Paddy Ryan, writing in Treoir, says the tune is often paired in sessions with "Johnny Cronin's Reel" after the influential recording of the set on a 1973 Comhaltas EP recording of Portroe, Tipperary, accordion player Paddy O'Brien with Séamus Connolly of Killaloe, called "The Banks of the Shannon."

Back to Mayor Harrison's Fedora[edit]