Find traditional instrumental music
This is the stable version, checked on 21 October 2021.
Jump to: navigation, search 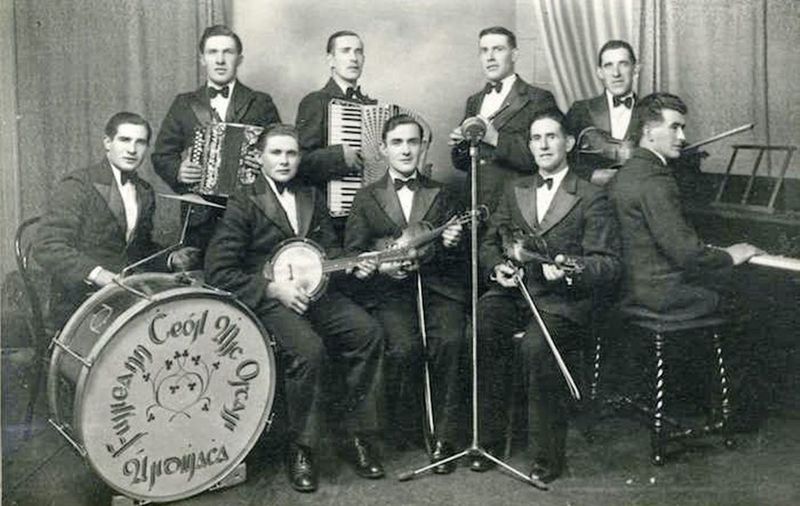 The McCusker Brothers Céilí Band
McCUSKER'S BARNDANCE. AKA and see: "Kerry Mills Barn Dance (2)." Irish, Hornpipe. D Major. Standard tuning (fiddle). AABB. The McCusker Brothers were a nine-piece sibling céilí band, consisting of fiddlers John, Vincent and Brendan (fiddles), melodeon player Benignus, piccolo player Kevin, banjo-mandolinist Francis, accordion player Thomas, pianist Bernard and and drummer Malachy (there were two McCusker daughters in the family, as well). It was a musical family, and all the siblings played instruments; their father played the piccolo, while their mother played the accordion. The family hailed from Kilcreevy, County Armagh, and the popular McCusker's céilí band played for dances and events for over 30 years all over Ireland, finally retiring at the end of the 1960's. Benignus McCusker recalled the growing up in the family for an interview with Brian Lawler on the Irish Traditional Music Archive site:

All during my young life, nothing else really mattered much except music. It was the big thing in your life, you know, and our house would have been full every night with people playing music, listening to music and even dancing. The chairs would have been cleared back and I can remember as a wee fella, sitting under the table and watching what was going on.