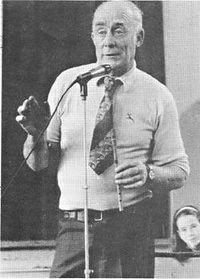 He [Talty] was sitting in the classroom in primary school. The teacher had left the room and Martin was trying out a little polka on the whistle. After going over the first part a voice behind him suddenly said "I think it goes actually like this," followed by the correct phrase on the whistle. This was Willie and the two became lifelong friends.

However, a stronger claim for the tune's composition belongs to East Galway flute player Eddie Kelly, who composed it as "Meelick Team (The)."