Me and My Fiddle

Back to Me and My Fiddle[edit]

ME AND MY FIDDLE. American, Reel and Air. A Major. Standard tuning (fiddle). A virtuostic tune composed by bluegrass fiddler Benny Martin [1] (1928-2001), born in Sparta, Tennessee, that became his signature tune (and song--words were also set to it, sung by Martin on his recording). He famously played an eight-string fiddle, and was known as “Big Tiger”, an affectionate name bestowed on him by his friend Hank Williams. Martin still has a reputation as one of the best (many say 'the' best) bluegrass fiddlers. 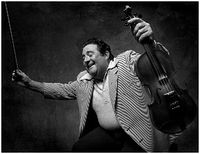 Back to Me and My Fiddle[edit]