Back to Meelick Team (The)[edit]

MEELICK TEAM, THE. AKA and see "Eddie Kelly's Jig (1)," "Martin Talty's Jig", "McGreavy's Jig," "McGreevy's." Irish, Jig. D Dorian: E Dorian. Standard tuning (fiddle). AABB. Composed by fiddler and accordion player Eddie Kelly, in honor of the victory of the Meelick team in a 1960's hurling championship, according to Séamus Connolly. Paul Cranford's website gives conflicting information: "Meelick Team Jig commemorates a hurling team from his native parish which qualified for and played in the first All-Ireland Hurling Finals held in 1884." [1] The story of this late 19th century team is told in detail [2] about the first ever All-Ireland Hurling Final, between Meelick from Galway and Thurles from Tipperary, whose teams competed at Birr during Easter, 1888. Included on the Meelick team was Lusmagh-man John Coolahan. 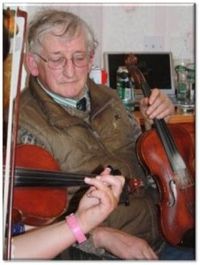 Although he lives in County Roscommon at present, Kelly was originally from Meelick, Eyrecourt, near Ballinisloe, east County Galway, born in 1933. Connolly & Martin print versions of the tune in two keys, as Kelly told them he had transposed the tune into E minor at one point to better suit the instruments in his local band.

Back to Meelick Team (The)[edit]