Find traditional instrumental music
This is the stable version, checked on 21 April 2021.
Jump to: navigation, search

However, the title Meg Merrilies derives from the name of a character in Sir Walter Scott's Guy Mannering [1] and, separately, the subject of a poem by John Keats (1795–1821) that begins: 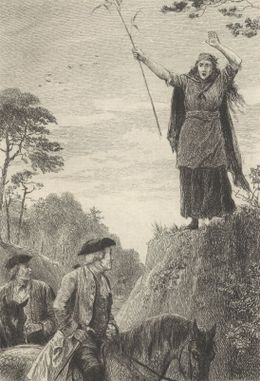 The Cure of Meg Merrilees--Drawn and Etched by C. O. Murray
:

Old Meg she was a Gipsy,
And liv'd upon the Moors:
Her bed it was the brown heath turf,
And her house was out of doors.

Her apples were swart blackberries,
Her currants pods o' broom;
Her wine was dew of the wild white rose,
Her book a churchyard tomb. 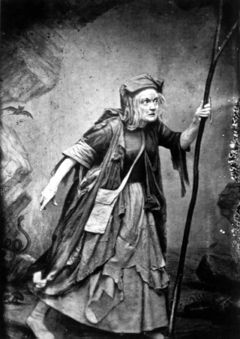 The characters in both works were based on a person named Jean Gordon, a mid-18th century inhabitant of the village of Kirk Yetholm in the Cheviot Hills, and wife of the King of the Gypsies, Patrick (sometimes "Johnnie") Faa. The character is that of a gypsy, or a half-mad seeress. Guy Mannering was adapted for the stage and the character of Meg was memorably played by the American actress Charlotte Cushman (1816-1876) in New York.