MEIKLEOUR BEECHES, THE. Scottish, Air (4/4time). A Major. Standard tuning (fiddle). AB. Composed by the great Scots fiddler-composer J. Scott Skinner (1843-1927). Skinner notes the Meikleour Beeches were "a famous hedge near Blairgowrie, some 80 feet in height. Said to have been planted in 1746." Wikipedia [1] notes that the hedges were "planted in the autumn of 1745 by Jean Mercer and her husband, Robert Murray Nairne on the Marquess of Lansdowne's Meikleour estate. It is said the hedge grows towards the heavens because the men who planted it were killed at the Battle of Culloden." 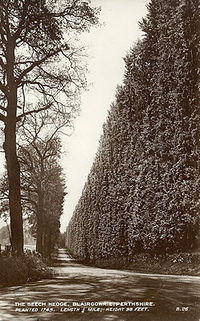 A c. 1932 postcard of the Meiklour Beeches


See also listing at:
See Gavin Greig's handwritten manuscript of the tune for the Harp and Claymore at the Univ. of Aberdeen Skinner site [2]