Back to Mellow Horn (The)[edit]

MELLOW HORN, THE. English, Air (6/8 time). C Major. Standard tuning (fiddle). One part. "The Mellow Horn" was a popular song "Written by George W. Hyatt. Composed, Arranged and Sung with Rapturous Applause by Mr. Jones," as the song's heading declared. 'Mr. Jones' was the actor and singer John Jones (1796—1861), formerly of the English Opera House in London. He emigrated to the United States and in 1828 made his American debut in Amateurs and Actors at Niblo's Garden, N.Y., in 1828. A reviewer from the Euterpeiad (May 15, 1830, p. 22), was in attendance at the Park Theater when Jones "sang his song, the 'Mellow Horn' so poorly the audience made him sing it over again." Jones died in New York in 1861.

It was frequently published on single sheets and folios (by Edward Riley in New York, for one), and in collections throughout the 19th century. A setting of the melody for guitar was published in New York in 1832 [1]. 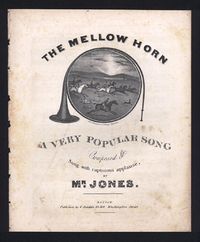 Back to Mellow Horn (The)[edit]