Back to Memories of Hector MacAndrew Master of Idione[edit]

MEMORIES OF HECTOR MACANDREW, MASTER OF IDIONE. Scottish, Air (6/8 time). E Major ('A' and 'B' parts) & E Minor ('C' and 'D' parts). Standard tuning (fiddle). ABCD. The tune was composed by Shetland fiddler Arthur S. Robertson in honor of one of the greatest Scots fiddlers of his generation, Hector MacAndrew (b. Fyvie, Aberdeenshire, 1903-1980). The Aberdeenshire fiddler was first taught to play by his father. 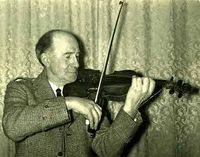 MacAndrew served in the British army in World War II in the north African desert, and, "it is said of him that after hearing the pipers practising, he was so moved that he vowed to himself, that if he came out of the war alive, he would do the best he could to keep Scots music to the fore." He once gave a televised fiddle lesson to virtuoso violinist Yehudi Menuhin in the BBC documentary "Mr. Menuhin's Welcome to Blair Castle," after which Menuhin said: “When I met this man and heard him play, I knew I was in the presence of Scottish history.”

Back to Memories of Hector MacAndrew Master of Idione[edit]