Back to Memories of Joe MacInnis[edit]

MacInnis began playing fiddle at age eight, influenced by a traveling greengrocer, Peter Campbell, who sold vegetables and buttermilk on a route that brought him by the MacInnis household. He would stop and play, and the young MacInnis watched intently. By the age of fourteen Dan Joe was accomplished enough to play regularly at local dances. He recorded three LP's in the early and mid-1960's. 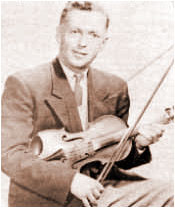 Back to Memories of Joe MacInnis[edit]