Back to Memories of Paddy LeBlanc

MEMORIES OF PADDY LEBLANC. AKA - "Memories of Paddy LeBlanc March," "Paddy LeBlanc's March." Canadian, March. Canada, Cape Breton. A Mixolydian. Standard tuning (fiddle). AABB. Canada, Cape Breton. A popular march composed by fiddler Donald Angus Beaton, in honor of Cape Breton fiddler Paddy LeBlanc (1923-1974), a native of East Margaree, Cape Breton. LeBlanc, a barber by trade, was of French stock from the Margaree area, the son of dance fiddler Jim LeBlanc. He received some classical tutelage and learned to read music well, and he maintained a vigorous playing schedule throughout Cape Breton and Nova Scotia, and beyond. He recorded two influential albums in the 1960's for the Celtic label (CX 29 and CX 41) under the name "Scotty" LeBlanc (after an endorsement by fiddler Dan R. MacDonald to the point that no one could play fiddle like he did unless deep down lay the heart of a Scot--despite his French background). 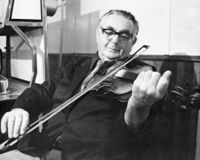 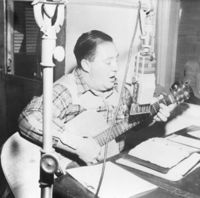 Back to Memories of Paddy LeBlanc