Back to Memories of Winston[edit]

MEMORIES OF WINSTON. Canadian, Strathspey. Canada, Cape Breton. A Major. Standard tuning (fiddle). ABCD. Composed by fiddler Jerry Holland (Cape Breton) in honor of Winston 'Scotty' Fitzgerald (1915-1987), whom Paul Steward Cranford calls "the most influential Cape Breton recording artist during the post war period." Holland learned many tunes from Fitzgerald's recordings, met the elder fiddler as a child, and as a young man played with him in the Cape Breton Symphony. The strathspey has pride of place as the very first tune in Holland's first printed collection of tunes. 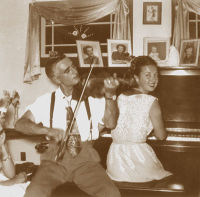 Back to Memories of Winston[edit]