Merry Lads of Killarow (The)

Back to Merry Lads of Killarow (The) 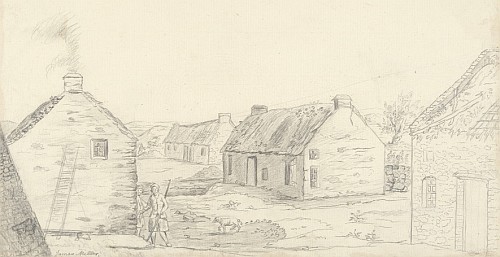 Killru (Kilarrow) village, sketched in 1772 by visitor James Miller.
MERRY LADS OF KILLAROW, THE. Scottish, Reel (cut time). G Major. Standard tuning (fiddle). AAB. "Merry Lads of Killarow" was included by Islay fiddler-composer Alexander Mackay (born 1773) in his Collection of Reels, Strathspeys and Slow Tunes (Glasgow, c. 1822). Although Mackay composed a number of tunes in the volume, this reel was not one of them, nor was it labelled as "old" or "very old" as are some of its contents. However the reel would presumably predate Mackay's time as the village of Kilarrow (note spelling difference) or Killaru, Islay, ceased to exist soon after he was born. Kilarrow was located very close to Islay House, the manor of the Campbell family of Islay. In 1768 the entire population of the village of Kilarrow began to be relocated to the new planned village of Bowmore as part of the then Laird's plans for the grounds of Islay House (Bridgend) and his desire for greater privacy. Bowmore, located on the other side of Loch Indaal from Killarow, was given a grid plan and better quality housing, which encouraged people to settle here.

The entire local population of Killarow had been engaged in spinning and weaving, which was done in their cottages, and one supposes this continued in Bowmore. However, a decade after the move John Simpson established the famous Bowmore whisky distillery, one of the oldest distilleries in Scotland that is still in operation, and the oldest on the famous whisky island of Islay.

Back to Merry Lads of Killarow (The)