Back to Merry Night at Tumble Brig (2)[edit]

MERRY NIGHT AT TUMBLE BRIDGE [2]. Scottish, Reel. A Major. Standard tuning (fiddle). AABB. Composed by Malcolm MacDonald of Dunkeld, who dedicated his entire first collection (comprised of his own compositions) to Mrs. Baird of Newbyth. The title refers to a bridge (and its village) over the river Tummel ('Tumble') in the Fortingall district of Perthshire built in 1730 by General Wade as part of his route from the Drumochter Pass to Aberfeldy. It lies at the head of Loch Tummel northwest of Pitlochry. 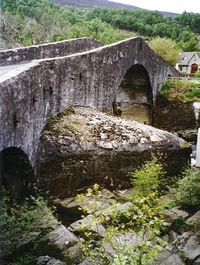 Back to Merry Night at Tumble Brig (2)[edit]