METAL MAN. English, Waltz. D Major. Standard tuning (fiddle). AABB. The waltz was composed by English musician Robin Dransfield. It was named after a lighthouse in Ireland, erroneously, it seems, said to have been in County Cork. There are Metal Man lighthouses in County Sligo [1] and County Waterford, however, erected in 1821 and 1823 respectively, each supporting a statue cast from the same mold. 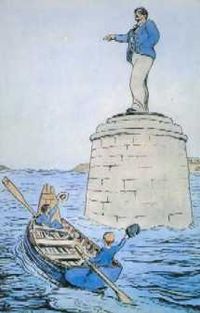 The County Waterford structure is actually a group of three round unpainted stone towers, about 30 feet tall, one of them topped by a cast iron sculpture of a sailor, his cap and coat painted dark blue and his trousers painted white, his arm outstretched to warn ships away from the rocks.