Back to Midlothian Pipe Band (The)[edit]

MIDLOTHIAN PIPE BAND, THE. AKA - "The Midlothian Amateur Pipe Band." Canadian, Pipe March (6/8 time). D Major. Standard tuning (fiddle). AABB'. Composed by Pipe Major Farquhar Beaton (as "The Midlotnian Amateur Pipe Band"), the third pipe major of the 48th Highlanders of Canada, who served from 1900-1913. Pipe Major Beaton was a successful instructor and introduced the playing of parts in pipe bands in Canada. The march was recorded in 1911 by Pipe Major David Laing of H.M. Scots Guards, on Lxo-1269 A22145, the first tune in a medley that also included the marches "Glendaruel Highlanders" and "Hot Punch." The tune is also played as a jig. 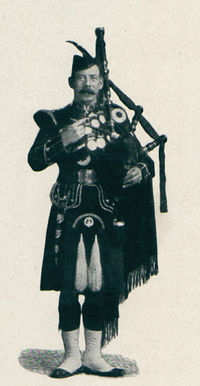 Back to Midlothian Pipe Band (The)[edit]