Find traditional instrumental music
This is the stable version, checked on 16 September 2021.
Jump to: navigation, search

Back to Midnight Serenade (1) 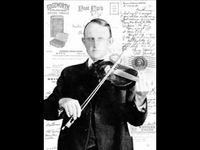 "Midnight Serenade" was the theme song of the Old Virginia Fiddlers, Patrick County, Virginia, a group consisting of John Watts "Babe" Spangler [1] (fiddle, Meadows of Dan, Virginia) and Dave Pearson (guitar), who recorded four sides for OKeh Records in 1929 (although two were unissued). J.W. learned to fiddle from his father, Wallace Spangler, a well-regarded fiddler from the area. In the mid-1920's Spangler (1882-1970) was known as the "Old Virginia Fiddler" on his broadcasts for the Corn Cob Pipe Show over WRVA in Richmond, Virginia. In 1940 Spangler recorded some tunes for WPAQ, Mt. Airy, N.C., that were later released by Country Records.

The tune, which has gone by a variety of names, is a derivative of the Scottish tune "My Love is but a Lassie Yet," and is usually known by old-time musicians as "Too Young to Marry" today.

See also listing at :
Hear Babe Spangler's 1929 recording on youtube.com [2], and at the Library of Virginia [3]

Back to Midnight Serenade (1)