Find traditional instrumental music
This is the stable version, checked on 10 May 2020.
Jump to: navigation, search

Back to Military Schottische

MILITARY SCHOTTISCHE. AKA and see "Pretty Baby," "National Schottische," "Russische Polka," "Texas Schottische," "Doppelpolka." American, Schottische or Polka. G Major ('A' and 'B' parts) & C Major ('C' part) {Ford}: D Major ('A' part) & A Major ('B' and 'C' parts) {Phillips}. Standard tuning (fiddle). ABCA (Ford): AABBC (Phillips). An international tune known either as a polka, schottische or barn dance. The melody is part of a very large tune family, with the exception of the third part which appears to follow the early 19th century convention of many marches and other martial tunes in that it was added as a contrast, or filler, for the main melody(s). Many of these third parts, usually in different keys, are called 'trio' parts. The German collector Boehme (1886) gives the note "known in 1842, very popular up to 1860," and printed it in his collection as "Russische Polka" (No. 257, pp. 162-163). Kerr's also gives the tune a German provenance, as it is listed in vol. 1 of Merry Melodies (c. 1880) simply under the title "German Schottische" (where it is the second part of a duet, juxtaposed with "Home Sweet Home"). The 'A' part of the tune "Snyder's Clock" is also the same. The first two parts are also closely related to the "Glenbeigh Hornpipe" family of tunes. 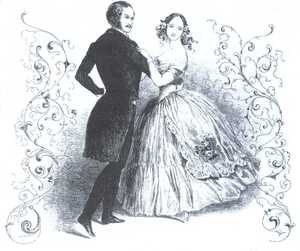 Illustration from the sheet music of the Hungarian Schottische

Alan Jabbour recorded a distanced version of the tune from fiddler Henry Reed (Glen Lyn, Va.) in 1967. Mr. Reed called the tune "Jawbone" (although he called another, similar, tune "Jawbone" as well). The field recording can be heard at the Library of Congress site [1].

Back to Military Schottische