Mill of Kylemore (The)

Back to Mill of Kylemore (The)[edit]

MILL OF KYLEMORE, THE. Irish, Reel. G Major. Standard tuning (fiddle). AABB'. Composed by Ballyfarnon, County Roscommon, flute player Josie McDermott (d. 1992), who also was a lilter, singer and saxaphone player. According to a 1999 article in Treoir, McDermott composed the reel for a friend, Michael Daly, former Mayor of Worthing (West Sussex, England), in memory of one of his visits. Daly was a flute player, originally from County Roscommon, who had moved to Croydon in the 1930's. He was an organizer for Comhaltas Ceoltóirí Eireann in England.

Everything about his home was Ireland. The iron gate leading into his drive had "Kylemore" in bold, and painted gold inscription along the whole length of it.

The tune is sometimes heard played as a hornpipe. 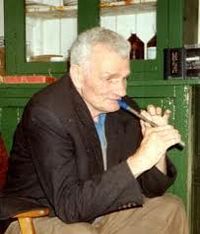 Back to Mill of Kylemore (The)[edit]