MINOS COURT. English, Country Dance/Jig (6/8 time). F Major. Standard tuning (fiddle). AABB. The melody seems unique to London publishers Samuel, Ann and Peter Thompson's Compleat Collection...vol. 5 (1788). In Greek literature Minos is the king of Knossos, Crete, who is said to have reigned over the main island and adjacent islands three generations before the Trojan War. However, the title may refer to Minos' appearance in Dante Alighieri's Divine Comedy chapter "Inferno", in which (according to Wikipedia): 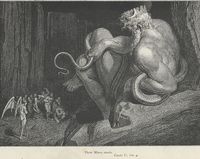 Minos is depicted with having a snake-like tail. He sits at the entrance to the second circle in the Inferno, which is the beginning of Hell proper. Here, he judges the sins of each soul and assigns it to its rightful punishment by indicating the circle to which it must descend. He does this by circling his tail around his own body the appropriate number of times. He can also speak, to clarify the soul's location within the circle indicated by the wrapping of his tail. [1]