Minstrel's Return from the War (The)

Back to Minstrel's Return from the War (The)[edit]

MINSTREL'S RETURN FROM THE WAR, THE. American, Air (whole time). C Major (Howe): D Major (Riley). Standard tuning (fiddle). One part. The song was composed in 1825 by American songwriter, poet and playwright John Hill Hewitt [1] (1801-1890), born in New York, educated in Boston and West Point (he did not graduate), and died in Baltimore, Maryland. It was Hewitt's first song and one of his most famous; "it eventually became a success internationally, making him the first American-born composer whose fame reached both sides of the Atlantic" [2]. Hewitt lived for several periods of his life in the South, particularly during the Civil War, where he espoused pro-Southern sympathies and contributed in his poetry, music and drama to the Confederate cause. 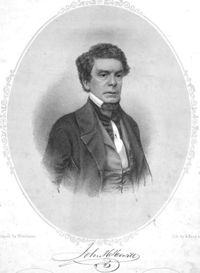 Back to Minstrel's Return from the War (The)[edit]