Back to Miss Baird of Saughtonhall (2) 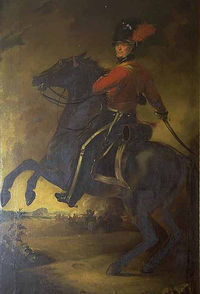 Baird is an old Scottish family that held extensive lands in Lanarkshire in the 1200’s, having been originally granted to a member of William I’s entourage who saved his life from a wild boar. In the early 14th century Robert the Bruce granted the Barony of Cambusnethan, Lanarkshire, to a Robert Baird. The family prospered and spread, one branch locating to Auchmeddan in Aberdeenshire, from which came the Bairds of Newbyth and Saughtonhall in East Lothian. During Nathaniel Gow’s time a General Sir David Baird (1757-1829) from Newbyth served in India, where he was one of only two survivors of the 73rd Highland Regiment at a British defeat at Madras in 1780; Miss Baird of Saughtonhall may have been a relative. Saughtonhall was the denotation of the estate and mansion but the name itself was an old one, probably deriving from ‘Saughton Haugh’ being old Scots for a low-lying meadow in a river valley. In the 1780’s Saughtonhall was at the time a “good old mansion house,” three miles from Edinburgh, the rental home of Lady Maxwell. Lieutenant-Colonel Sir James Baird inherited Saughtonhall when he succeeded to the title 6th Baronet Baird, Saughtonhall, in 1771. He commanded the East Lothian Yeomanry Cavalry regiment from its embodiment in 1797 and died 1830. In 1841 records indicate a railway line had been routed through the estate “to the detriment of the unity of the parcel.” There was a famous asylum for the insane at Saughtonhall in the 19th century. By the early 20th century the estate had disappeared and was developed for housing and community structures. 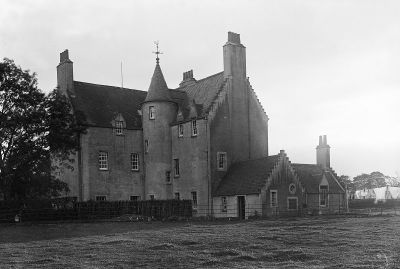 The “Miss Baird” of the title is presumably one of three daughters born to James Baird and his wife Henrietta, the third daughter of Wynne Johnston of Hilton. She may have composed tunes herself (as did her sister, for whom see “Miss Johnston of Hilton’s Fancy”, who was a prominent women of the Scottish Enlightenment). James and Henrietta married in 1781, and she died in 1817 at Inveresk House. Their daughters were Margaret Mary (died at Inveresk House, unmarried in 1818), Henrietta Warrander Cecilia (married John Wauchope), and Alicia Sophia (Alicia died, unmarried, at Saughtonhall in 1821). One of the 'Miss Baird's' also composed a reel, “Eighth of December (The).”

Back to Miss Baird of Saughtonhall (2)