Back to Miss Drummond of Megginch[edit]

MISS DRUMMOND OF MEGGINCH. Scottish, Strathspey. C Major. Standard tuning (fiddle). AAB. Credited to John Bowie in Malcolm MacDonald’s 3rd Collection, dedicated to Miss Drummond of Perth. Megginch Castle has been in the hands of a branch of the Drummond family since 1664, when it was sold to the 8th Lord Lennoch, Hereditary Seneschal of Strathearn. His descendants still live in the castle. Another wing added by Robert Adam in 1790 and other additions were made in 1820 and 1928. 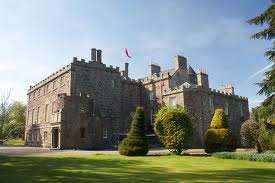 Back to Miss Drummond of Megginch[edit]