Find traditional instrumental music
This is the stable version, checked on 17 March 2021.
Jump to: navigation, search

Back to Miss Gayton’s Hornpipe

Francis O’Neill printed the tune under the title “Sailor's Hornpipe (3)” in his Music of Ireland (1903) although he found the tune in R. Cock's & Co.'s Encyclopedia of Melody, One Thousand and Twenty-one Airs Selected from the National Music of All Countries, etc., etc., arranged by William Forde. It is not known how he might have though it had an Irish provenance. It was recorded in 1932 by accordion player Margaret McNiff Locke (along with fiddler Joe Tansey and banjo player E. McColclough), where it sounds much like a barn dance instead of a hornpipe. 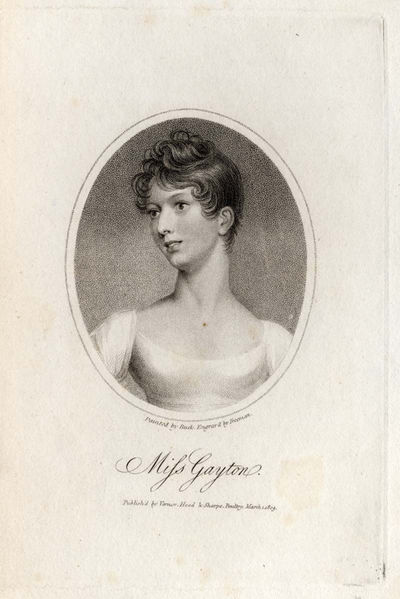 Esther Jane Gayton, 1809, prior to her marriage

Miss Esther Jane Gayton was a dancer and actress who played a Sylph (fairy) at Drury Lane as early as 1806. Sir Walter Scott mentions her (in the Edinburgh Annual Register, 1810) as performing in 1808 in a revival “of our old favourite, Bluebeard,” in which Miss Gayton appeared in the role previously played by Madame Parisot. In 1809 she married the Reverend William Murray, half-brother of Sir James Pulteney, 7th Baronet or Clermont, Fifeshire, whose title Murray ultimately assumed (Gentleman’s Magazine, May, 1811). She died in 1875.


Back to Miss Gayton’s Hornpipe