Find traditional instrumental music
This is the stable version, checked on 28 September 2022.
Jump to: navigation, search

MISS ISABELLA MACPHERSON GRANT'S STRATHSPEY--OF BALLINDALLOCH. Scottish, Strathspey. F Major. Standard tuning (fiddle). AAB. Composed by William Marshall (1748-1833). Miss Isabella lived at the castle of Ballindalloch, a manor on the east bank of the River Avon and was a relation of General James Grant who is perhaps the most famous of the Macpherson-Grants (Moyra Cowie, The Life and Times of William Marshall, 1999). From 1763-1771 he was governor of East Florida, after which fought in the American War of Independence. He added two new wings to Ballindalloch in 1770, one of them to house his favorite French chef, as he was one of the most noted bon viveurs of his day. He even took his cooks along with him when traveling, and had the habit “not to hazard his palate on any dish until its quality had been previously ascertained.” Cowie says that he loved good food and took his French chef with him when he retired to the castle. 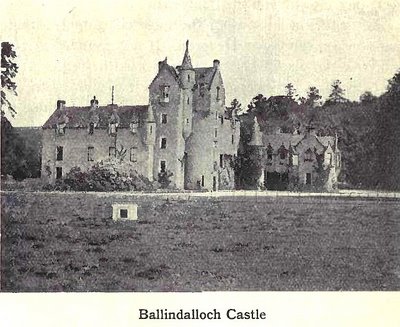