Back to Miss Maydell Armstrong

MISS MAYDELL ARMSTRONG. English, Hornpipe. England, Northumberland. D Major. Standard tuning (fiddle). AABB. Composed by Northumbrian piper Tom Clough [1] (1881–1964) of Newsham, a member of a Northumbrian family in which the piping tradition remained unbroken for four or five generations, with the family style and repertoire intact. Tom Clough was much sought out by those wishing to learn the instrument. The person of the title may have been a relation of Hexham piper George Grey "G.G." Armstrong (1877–1955), an influential teacher. 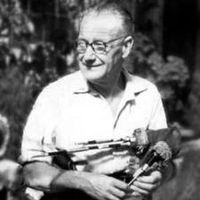 Back to Miss Maydell Armstrong