Find traditional instrumental music
This is the stable version, checked on 15 August 2020.
Jump to: navigation, search

Back to Miss Menager's Hornpipe

The title could refer to one of two sisters, Arabella ('Bella') and Mary Meange. 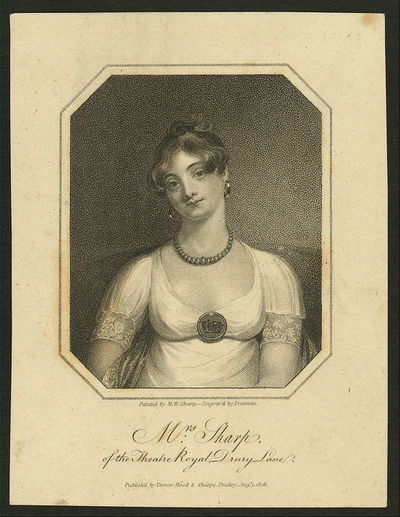 Arabella, the younger sister, was brought up on stage from the time she was nearly an infant, and was instructed by Didelot and D'Egville, "the latter making her 'accomplished' at the hornpipe" [Highfil, A Biographical Dictionary of Actors, Volume 10]. By the end of the 18th century she was appearing regularly at Drury Land and other London venues. Around the year 1804 she married Michael William Sharp, a successful portrait painter and a student of Sir William Beechey. As Mrs. Sharp she continued her stage career until her death in 1817.

Mary Menage (note spelling) was born in 1778. By the age of 13 she was already dancing on stage at London’s Pantheon Opera House in the early 1790’s. She was a popular dancer and featured stage performer at London’s Theatre Royal, Drury Lane, and other venues at the end of the 18th and beginning of the 19th centuries. Miss Menage is listed as the performer for the song “See brother see on yonder bough” in Longman & Broderip’s printed edition of The Children in the Wood (1793), a ballad opera by Thomas Morton and Dr. Arnold. She is also listed as one of the performers (along with Master Walsh and Miss De Camp) for the song “And will you soothe my anguish” in The Prisoner (1792), authored by J. Rose and Thomas Attwood, again published by in London by Longman & Broderip. The part of Frizaletta in Kane O’Hara’s “burlesque burletta” Tom Thumb was played by Miss Menage.

Back to Miss Menager's Hornpipe