Find traditional instrumental music
This is the stable version, checked on 26 February 2020.
Jump to: navigation, search

Back to Miss Miller of Dalswinton

MISS MILLER OF DALSWINTON. Scottish, Strathspey. D Major. Standard tuning (fiddle). AAB. Composed by Robert Riddell in honor of one of the daughters of Patrick Miller [1] (1731-1815) of the estate of Dalswinton, two of whom survived him; Janet, married to John Francis, 15th earl of Mar; Jean, married to Leslie Grove Jones, an officer of the Grenadier guards. 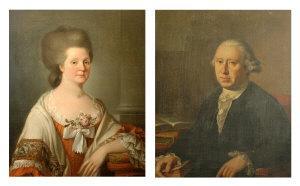 Miller was the owner of the property called Ellisland in Dumfriesshire that poet Robert Burns leased from 1788-1791 to try his hand at farming (which did not go well for him). Captain Robert Riddell of Glenriddel lived at Friar's Carse, and had built a small summer house called the 'Hermitage' in a secluded part of his estate, just a few fields away from Ellisland. Riddell and Burns were friends and Burns often used the cottage for writing and drinking sessions. Burns, known for his 'conviviality' as well as his poetry, dined one night at his friend (and landlord) Mr. Miller's of Dalswinton, when "a Lord in a state of inebriation...asked about one of his host's daughters:

How daur ye ca' me " Howlet-face!
Ye blear-e'ed, wither'd spectre!
Ye only spied the keekin'-glass,
And there ye saw your picture. ...[Duhland, The National Burns]

Miss (Jean) Miller of Dalswinton is a lesser contender for the heroine of Burns' poem "Bonnie Jean" ("There was a lass, and she was fair"), although Jean MacMurdo of Drumlanrig is usually identified as the inspiration for the verse. She was a noted beauty as this passage (from The Transactions and Journal of the Proceedings of the Dumfriesshire and Galloway Natural History and Antiquarian Society, 1867) attests:

After the blessing was pronounced the minister bowed from the pulpit to the principal heritors according to the right of precedence. Two heritors in the parish of Lanark so keenly disputed about the right to the first bow that the matter was referred to the presbytery, who forbade the minister to bow any more in the church, and admonished the two heritors for their conduct for the future. Dr. Wightman of Kirkmahoe paid a very complimentary remark to Miss Miller of Dalswinton, who was greatly noted for her beauty, and who rallied the minister one day for not bowing towards her on the previous Sunday when she was alone in the family pew. "I beg your pardon," he replied, "but you surely know that angel worship is forbidden in the Church of Scotland;" and, lifting his hat, passed on.

"Braes Aboon Bonaw" is similar in the first strain with "Miss Miller of Dalswinton."

Back to Miss Miller of Dalswinton