Back to Miss Muir MacKenzie[edit]

MISS MUIR MACKENZIES. Scottish, Strathspey. E Major. Standard tuning (fiddle). AB. Composed by Inver, Perthshire fiddler-composer Niel Gow (1727-1807) for one of the eight daughters of Alexander Muir-Mackenzie (1764-1835), for whom the baronetcy was created in November, 1805. Born Alexander Muir of the Muirs of Cassencarie, he assumed the additional surname Mackenzie when he succeeded to the estates of his great-uncle, John Mackenzie of Delvine. Alexander married in September, 1787, Jane, the eldest daughter of Sir Robert Murry, 6th Bart. of Clermont, co. Fife. See also other tunes for the family: “Mr. Muir Mackinzie’s Favorite,” “Mrs. Muir MacKenzie” “Lady Muir MacKenzie’s Favorite.” Susan Muir Mackenzie (d. 1852) was the eldest daughter and married in 1817. The others did not marry. 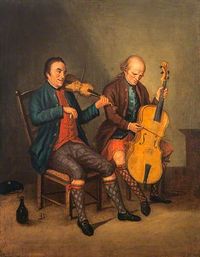 Back to Miss Muir MacKenzie[edit]